Space travel has been a recurring theme in Mir’s work since the very beginning of her career. She considers global events in popular culture such as the moon landing, the development of a mass aviation culture and the progress of various space programmes to have a great influence on how we live and perceive ourselves in the world. Mir’s fictional narratives are both a celebration of these events and a questioning of their historical and social trajectories.

Mir’s films are autonomous epilogues to her public performances where each refers to an ambitious historical narrative. In her later film The Seduction of Galileo Galilei (2011) and in the series of collages The Dream and The Promise (2008-9), she underscores particular similarities between religion and science. Inspired by a quote by 16th century Italian scientist and philosopher Galileo Galilei, who conducted unprecedented scientific discoveries in physics, mathematics and astronomy, but who also declared ‘to have learned more through divine grace than through telescopes’ (Galileo Galilei, Letters).

This exhibition in M – Museum Leuven brings together for the very first time Mir’s early films First Woman on the Moon (1999), Gra­vity (2006) and The Seduction of Galileo Galilei (2011) with the series of collages The Dream and the Promise (2008-09) and the more recent work Satellite Crashes down in Porto Alegre, Brazil (2013).

- One of Aleksandra Mir’s best-known works is First Woman on the Moon (1999). The film documents a staged event recreating a moon landscape and featuring a ‘landing’ ceremony on the beach in the Netherlands. Following President Kennedy’s call to put a man on the moon before the end of the 1960s, Mir started her mission to get a woman to the moon before the end of the millennium. Despite her limited means, she succesfully declared herself the first woman on the moon thirty years after the first moon landing. Assisted in this feat by the local population, dozens of volunteers and obliging sponsors, she was thus able to infiltrate the male-dominated history of space travel.

- In 2006, Mir launched the sequel to her 1999 moon landing and started a new ambitious space travel project, the construction of a 22-metre-high rocket. With the help of technicians and engineers the rocket was built from waste materials such as steel, fibreglass, tractor tyres, industrial fans, etc. To complete the whole composition, Mir adopted theatrical lighting and smoke machines evoking the NASA hangar at the Kennedy Space Centre. Mir documented the proceedings in her film Gravity.

- For The Seduction of Galileo Galilei (2011), Mir was inspired by the story of Galileo throwing weights with different mass from the Tower of Pisa in order to provide evidence for ‘the law of falling bodies’. The video documents Mir’s own battle with gravity as together with her crew and several professional crane operators they stack car tyres as high as possible until the tower eventually tips over to a fall and they start over again. These repeated attempts were undertaken over the course of one day.

- The Dream and the Promise (2008-2009): Mir presents a series of collages that connect religious iconography with images of space travel. Science and religion are often juxtaposed as two contradictory extremes. However, Galileo Galilei, the father of modern science, was also a devout Catholic and thus his life work is evidence of the convergence between the two. In order to illustrate the relationship between science and faith, Mir reverts to images she found in two very different locations: the Kennedy Space Centre in Florida and the Baroque churches of Sicily. She discovered that the iconography used by NASA and the Catholic Church has a lot in common.

The exhibition in M - Museum Leuven is accompanied by a fully illustrated poster book The Space Age.

The Swedish-American artist Aleksandra Mir was born in 1967 in Lubin, Poland. She currently lives in London but travels continuously with her work.

in presence of Aleksandra Mir, combined with a visit of 'Anger Ram Herd' by GERARD HERMAN 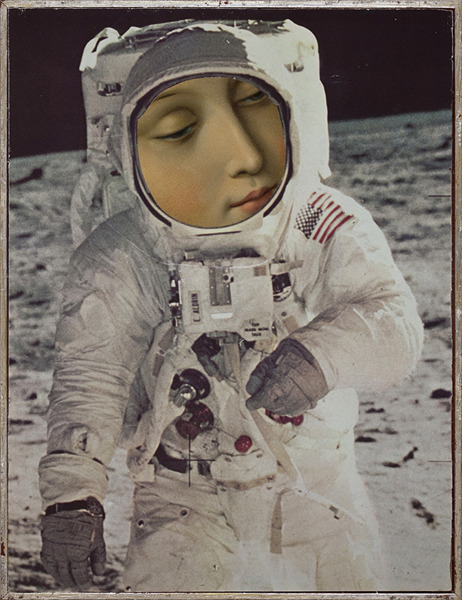