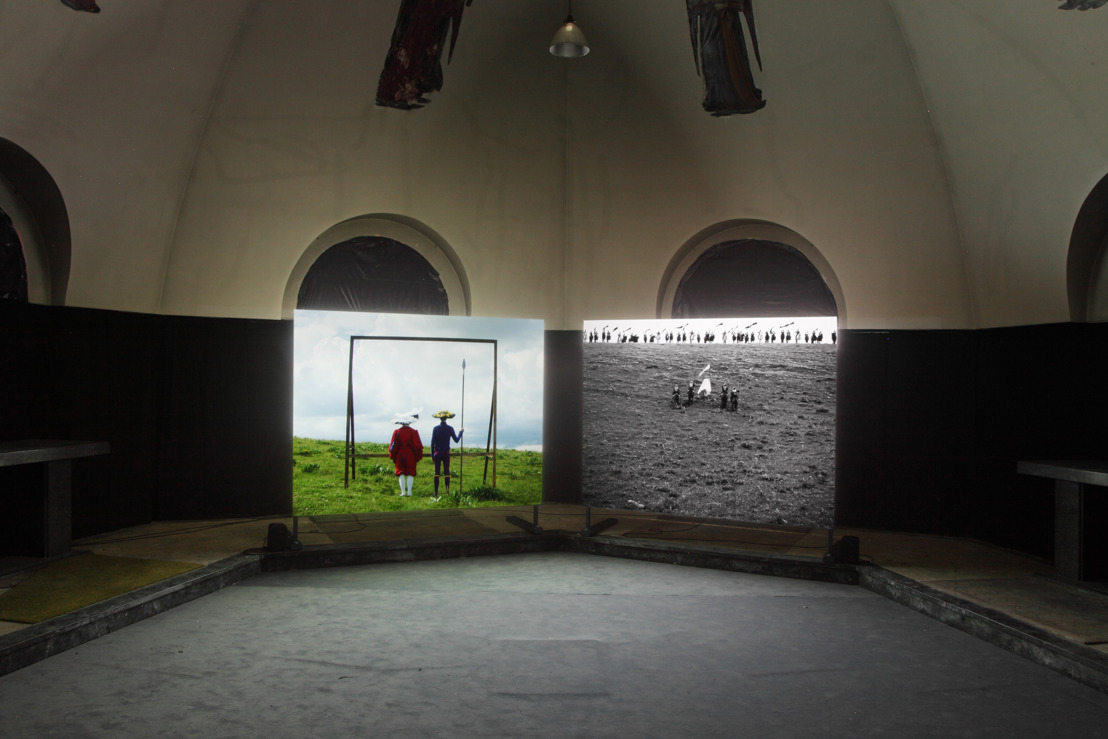 ‘The sense of experiencing the end of history was uplifting. The world was going to be reborn and we were the chosen ones.’ This call to use force to establish the Kingdom of God on earth sounds surprisingly topical, yet the words were written in 1534. The installation Münster takes us back to that time in the heart of what is now Germany. Münster alludes to the recapture of the city from Anabaptist occupation and reflects on the relationship between religion, politics and violence. The double film installation is a theatrical pastiche of a historical event and poses questions of universal relevance. In the left screen, we see two soldiers from the army that has come to liberate Münster from its occupiers. The screen on the right shows the situation within the walled city. The Anabaptists sought to establish a radical new regime there under the leadership of John of Leiden (1509–1536). The lengthy conversations and hesitant attitude of the soldiers contrast with the revolutionary zeal of the Anabaptists.

Does a utopian society mean that we have to blend public and individual needs? Is it possible to reconcile our personal desires with collective wishes? Adrien Tirtiaux’s Boven de Muur is an installation that poses interesting questions and is specially designed for Tracing the Future. The construction is unusual in the way it links the freely accessible city park in Leuven with several private gardens on Vlamingenstraat. You are invited as visitor to enter the artwork, which you can then explore via stairways, bridges and platforms, some of which take you right into someone’s garden.  Other parts, by contrast, have been adapted to the wishes of the householders and remain private.You can also view Boven de Muur as a social sculpture. The processleading up to the work was an important part of this project, in which the residents of Vlamingenstraat were actively involved. Tirtiaux’s sculpture literally breaks through the boundary between public and private. It challenges you to think about how far you’d be prepared to go in opening up your property for the general good. Would it make us more inclined towards a utopian society in which possessions are distributed equally and everyone has ultimate freedom? Or does it actually have precisely the opposite effect?

‘Who does the earth think it is?’ asks the voiceover in Medium Earth. The question implies that humanity is capable of grasping the essence and deepest thoughts of nature. The video shows images of expansive desert regions in southern California, with cliffs and sprawling valleys. All this natural magnificence is underpinned, however, by a savage history of interacting tectonic plates. The imploring soundscape and voiceover added to the video suddenly give this seemingly laconic desertscape a dark and apocalyptic appearance.

How can we protect the rainforest – our planet’s ‘lungs’ – from unlawful intruders? Forest Law by Ursula Biemann and Paulo Tavares seeks an answer to this question. The multimedia installation analyses a conflict raging in the oil and ore-rich region on the fringe of the Amazon Rainforest in southern Ecuador. In terms of biodiversity it is one of the world’s most remarkable areas. In addition to video material, we are presented with archival documents, maps, photographs and soil samples. There are personal testimonies, but also hard evidence. Large-scale lawsuits are also referenced, which the indigenous population has launched in an attempt to obtain protection.

Allan Sekula (1951-2013, USA) was fascinated by Constantin Meunier’s realism. Like that nineteenth-century
artist, Sekula explores the world of miners and dockers. For Tracing the Future, we take Sekula’s dialogue with
Meunier a step further. A presentation of objects, engravings, graphics, postcards and photographic archive material reveals Sekula’s vision of the world of the mineworker.

Tracing the Future is a double project with Yto Barrada.

Exhibition organized as part of the urban project Utopia and realized by the Commission of Contemporary Art of the KU Leuven and M – Museum Leuven conjointly with the Lieven Gevaert Research Centre for Photography, Art and Visual Culture, the Higher Institute of Philosophy.