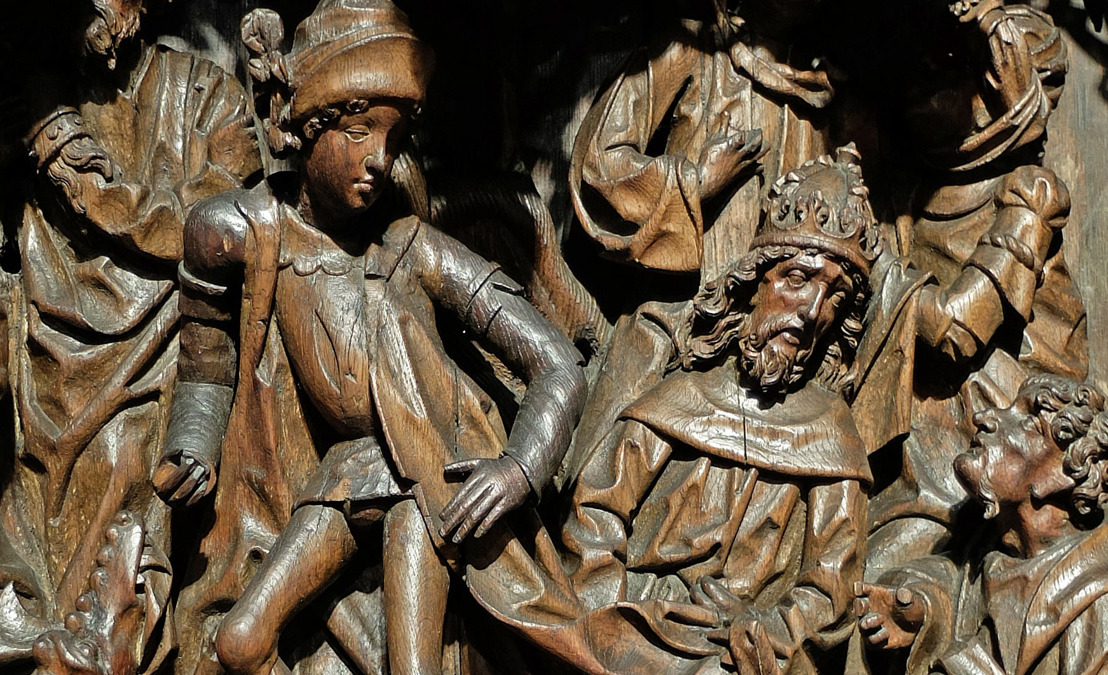 In the Middle Ages there were several altarpieces in Leuven dedicated to St Peter, patron saint of the city. Today they are comparatively rare. Thanks to this exhibition, a St Peter Altarpiece will finally be on view in Leuven once more. Getting it here represents something of an accomplishment in itself. The altarpiece weighs nearly 200 kg and is not easy to handle. It is moreover full of fragile details that, after five centuries, are no longer as firmly attached as they used to be. The wooden altarpiece, once brightly coloured and gilded, depicts the legend of St Peter in three panels. The top is richly decorated and curling vines laden with clusters of grapes climb up the edge of the cabinet. All preparations were made to allow the trip from Aachen to Leuven to take place as smoothly as possible.

Michael Rief, vice-director and head of collections at the Suermondt-Ludwig-Museum: "The imposing carved altarpiece is the only large-scale example to have survived the Protestant iconoclastic ravages in the northern part of the Low Countries. It was made around 1500-1510 by two carvers in a workshop, located in a city of the hertogdom Gelre. Research shows that the retabel possibly originates from the Sint Petrus' Bandenkerk in Venray, which was sold in 1835 to an English artdealer or collector. In 1908 the Suermondt-Museum succeeded in purchasing the piece on the Berlin artmarket."

The altarpiece is just one of the 95 artworks that will travel from Aachen to Leuven. The Suermondt-Ludwig-Museum in Aachen has one of the largest collections of medieval sculpture in Germany. Their collection of sculptures from the Low Countries, however, is less well known. This is one of the reasons why M entered into long-term cooperation with the museum in Aachen. Peter Carpreau, curator of old masters at M-Museum Leuven and co-curator of the exhibition: “M wants to be an international catalyst for research into medieval sculpture. In 2014 we already took the first step by setting up the expertise centre for medieval sculpture, ARDS. This exhibition represents a new and important step. In this way, sculpture from the Low Countries will receive the international attention it deserves.”  For Peter Bary, director of M-Museum Leuven, it is exceptional for an entire museum collection to be researched, published and displayed in this way: “M has a collection of Late Gothic sculpture of the highest international quality, represented by the Brussels sculptor Jan Borman, among others. Thanks to this collaborative effort, we not only gained new insights into our core collection, the research has also reinforced the role of M as an international centre of expertise.”

The Aachen-based Ludwig foundation fully supported the concept of the project. Michael Rief: " They granted entire financial cover for cleaning and conservation measures on all sculptures, taking of new digital images, making of condition reports and the printing of the new book, at the same time the complete catalogue of the Netherlandish sculptures of the Aachen collection and the handbook for the exhibition."

The initial results of this collaboration are on view for the first time in the research-based exhibition Crossing Borders: Medieval Sculpture from the Low Countries, which runs from 22 September 2017 until 27 Mai 2018 at M-Museum Leuven. The press conference at M will take place 21 September at 11:00.

An initiative of and research by ARDS, Expertise Centre for Medieval Sculpture, in collaboration with the Suermondt-Ludwig-Museum in Aachen. On the occasion of the exhibition, a catalogue will be available in German.