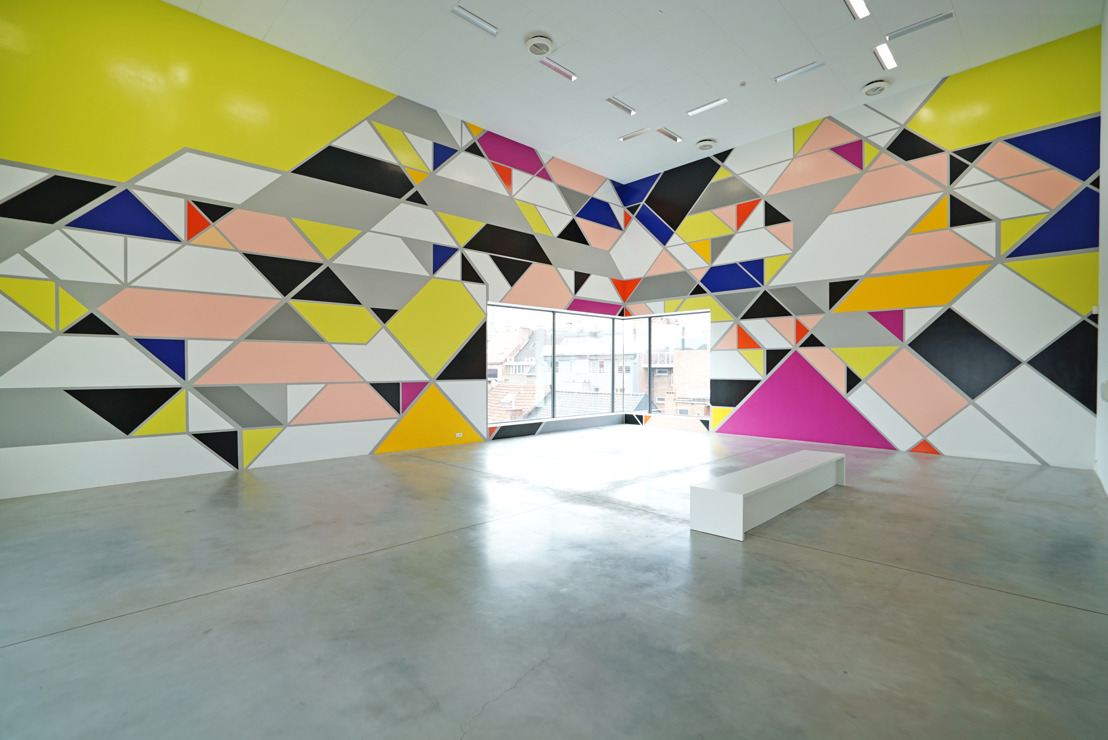 Her abstract, diagrammatic paintings employ and create a ‘virtual architecture’ that play with notions of social space, identity, and capitalism. Morris incorporates a wide range of references including Oscar Niemeyer, perfume distillation, airports, crowd control, Olympic Games, advertising, prostitution, the Eiffel Tower, Romy Schneider and Sambódromo among many others. Located at the crossroads of Pop, Conceptual art and geometric abstraction, Morris has been an influential force since the late 1990s, manifesting the complex conversation between the artist, society and power structures that govern them.

Sarah Morris has created a unique wall painting specifically for the last room of her exhibition at the top of M - Museum Leuven. Here she looks to the future and draws inspiration from the emerging forms of Abu Dhabi. Five painters worked for four weeks on the piece, which consists of 11 different colours. The imposing grid is 23 metres wide and 7 metres high. Sarah Morris has made several site-specific designs and murals in the past, including the Gloucester Road tube station in London (Big Ben, 2012) and one at K20 in Düsseldorf (Hornet, 2010).

Sarah Morris’s films encourage us to dream, but also to think. They explore a city through its architecture, politics, population groups, industry, culture and leisure. In making them, Morris blends several different cinematographic styles, from documentary to narrative, although the way she edits her images is unconstrained, without rigid story lines. The exhibition Astros Hawk is showcasing four films: Strange Magic, Rio, Beijing and 1972.

Her latest film, Strange Magic (2014), surveys France’s production and manufacturing of luxury goods as the source of capital for the construction of the museum itself. “Liquidity” is a recurring element in this film. Not just physical liquids like fountains, the Seine, champagne and perfume, but also the liquidity or intangibility of money (capital) is referenced. The title refers to the almost alchemical processes depicted in the film, some of which are medieval yet industrialized. Morris shows wealth as well as poverty. She flirts with luxury, but also distances herself from it.

In the case of Sarah Morris’s film Rio (2012), it was the failed film ‘It’s All True’ by Orson Welles that led her to start the project. The work highlights the dual character of Rio de Janeiro. As always, she made a parallel series of paintings ‘Rio’, before creating another series ‘São Paulo’ based on Brazil’s largest metropolis.

In Beijing (2008) Sarah Morris focuses on the city during the international spectacle of the 2008 Olympics. Morris was one of the few people allowed to look behind the scenes, a privilege obtained after a long dialogue with the International Olympic Committee.

While she was in pre-production for the film ‘Beijing’, Morris had the idea to make the film ‘1972’ in 2008. It focuses upon the terrorist attack during the 1972 Munich Olympics, and centres on the failure of system planning and Nationalism. The psychologist, and former choreographer, Dr Georg Sieber was responsible for the security of the Games and for the contingency scenario planning which he predicted in his infamous scenario #26.

Morris sees the paintings and films as two sides of the same coin. Both depict social space. Whereas the paintings are slowly produced and constantly evolving, the films are bursts of activity involving much negotiation and many individuals. The two temporal speeds enable the other to exist. Both forms of art show the coordinates of a city. Morris is always revealing the power structures of cities, bureaucratic institutions, media and architecture. Her choice of color is a careful articulation, from diverse elements she encounters while visiting and moving through a place. Her painting ‘Annual Solar Eclipse [Rio]’ (2014), which she based on the unique, visceral atmosphere of Rio de Janeiro, is a good example of complex geometric abstraction.

Sarah Morris’s interest in film also comes to the fore in her works on paper. She has painted, in her signature graphic style, on posters of important films, such as Pulp Fiction or The Parallax View. The exhibition at M also presents four posters that she has designed for each of the films presented in the show: Strange Magic, Rio, Beijing and 1972