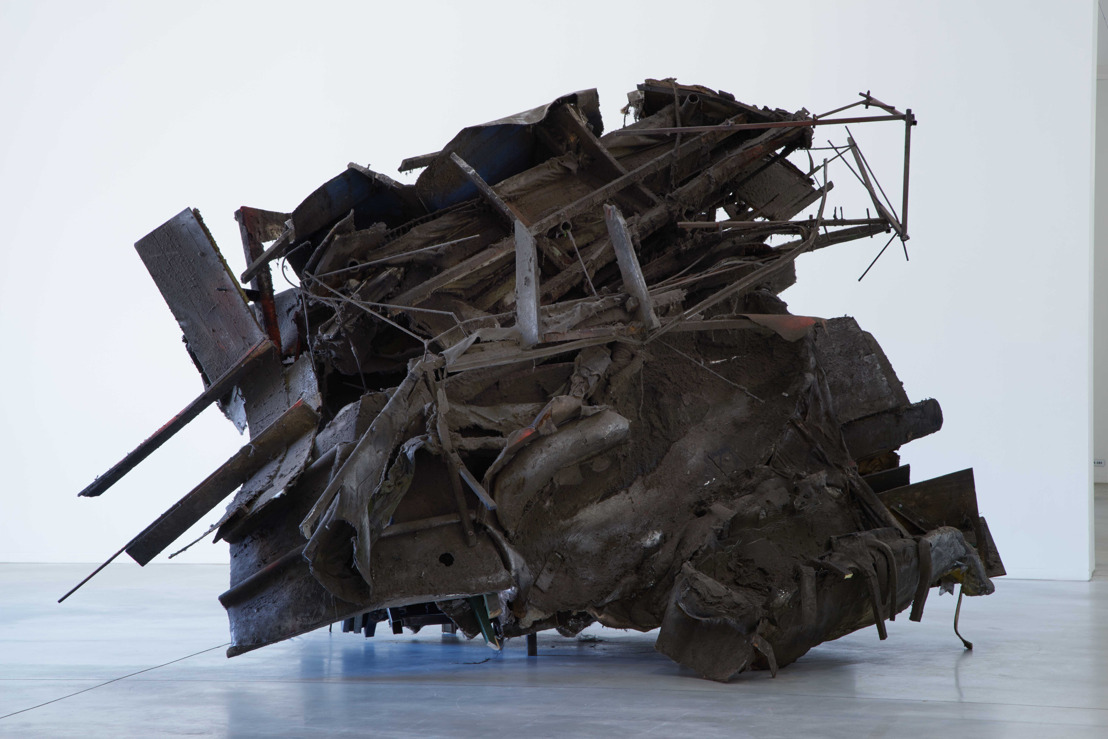 Peter Buggenhout makes colossal installations and sculptures on plinths. He uses construction waste, packaging materials, house dust, sheets of plastic, frayed textiles, entrails, horsehair and blood. This makes his works anonymous and indefinable. The installations by Peter Buggenhout are a mirror of the complex world around us.

“This is what I aim to do: I want to tread on the world’s tail”

After touring international exhibitions, M is presenting the first large-scale introduction to Peter Buggenhout in his homeland. The exhibition comprises a retrospective of his work from the 1990s until the present day. M is bringing together his three series – Mont Ventoux, Gorgo & The Blind Leading The Blind – with a total selection of about thirty works. The exhibition featured both smaller works on plinths and room-filling dust formations, as well as recent work with coloured elements.

This exhibition is being organised at M in the context of a series of large-scale monograph exhibitions that offer a platform to important Belgian artists, such as Jan Vercruysse, Philippe Van Snick, Dirk Braeckman, Geert Goiris and Patrick Van Caeckenbergh.

Peter Buggenhout transforms waste, dust and entrails into installations of various sizes – from colossal to smaller-scale works. He is greedy and pulls out all the stops in order to squeeze all the richness of the world around us into his works. He abandons all simplicity and decisively opts for complexity and detail. In this sense, he might be considered a late Romantic. As a reaction to 18th-century rationalism, Romanticism emphasised that it is impossible to grasp the whole world with the human spirit.

“I am ambitious and greedy. I want to encompass the whole world with my work. Not just to cover one or two facets, but everything. I actually try to take everything around me – from the leaves on the trees in the garden around my studio to the monumental cranes in Ghent harbour nearby – and squeeze it into my work somehow, to produce the same wealth of impressions, feelings and possible reflections you have when you walk around somewhere, musing or lounging on the couch at home. I try to fit all the possible impressions that might occur simultaneously into my work.”

Peter Buggenhout imposes no limitations on his choice of materials. This freedom allows him to shape the form exactly as he wants. Construction waste, packaging materials, house dust, sheets of plastic, frayed textiles, entrails, horsehair or blood are the glue that hold his works together. These are things that have no meaning. He succeeds in making these unrecognisable and formless materials communicate with one another. He often works on ten or fifteen pieces at the same time. Elements from one work are sometimes used in another until the work exists independently of the others.

“I have no idea what the inherent meaning of a particular material or object is supposed to be. Things mean nothing. We imbue them with meaning because we are incapable of dealing with them otherwise. Nevertheless, every object is empty. I make sculptures without direct references and pursue the total autonomy of the object... This is an immense challenge that is becoming increasingly difficult. When I make the hundredth ‘The Blind Leading The Blind’ piece, it will unavoidably refer to the 99 works that preceded it. I try to eschew these references by making each piece as different as possible.”

The freedom that Peter Buggenhout takes in his creative process is also granted entirely to the viewer. It is thus impossible to remember his sculptures. As a viewer, you feel as though you are unable to contextualise the work. The only remaining impression is a vague memory, such as for example, an amorphous thing covered with dust.

Scale is also relative to him. He makes no distinction between big or small, the inside or the outside. The perspective does change, however. Consequently, the smaller sculptures affect your eyes, while the larger works have a more physical effect, on the body.

“I do not express anything fundamentally different in the smaller works than in the larger ones. The only difference is that the larger works have a more physical impact and that the smaller works are processed more mentally. A sculpture that you can walk around offers the viewer a different perspective than a monumental sculpture that you just have to stand in front of.”

Peter Buggenhout divides his work into three series with the overarching titles Mont Ventoux, Gorgo and The Blind Leading The Blind. These titles balance between mythology, art history and biblical and literary references. They appear to contain a deeper meaning, but every association between the title and work is completely open. Rather than clarifications, they are each little portions of Buggenhout’s philosophy. They tell you what the artist was thinking at a certain point, but they do not anticipate the works in each series.

‘The series and their titles refer to the impossibility of ever really understanding anything, and to the immense complexity of our surroundings. These are not explanatory titles: they allude to a kind of practical philosophical approach to my perspective on things.’

“My method is relatively consistent. On the other hand, each work has to be different from the many others than preceded it, and has to disengage from them. To this end, I strive to use all expressive means. For example, over the past few years I have started using colour. At first, my works were more organic, but I have since added more linear and industrial elements.”

Peter Buggenhout explores new avenues and presents them at M. For example, Room 26 features a recent work from the On Hold-series (2014). To make this piece, he used old and unusable bouncy castles. He incorporates the colourful pieces into the structures of discarded material and produces a new kind of menacing vulnerability.

The book “We did it before, we will do it again” is being published in conjunction with the exhibition (Jnf Editions/Editions de l’amateur Publishers). This publication juxtaposes Buggenhout’s work with sources of inspiration that were of great importance to his work. In addition to essays by Selen Ansen and William L. Rathje, the book contains an extended interview with curator Eva Wittocx and passages of text by Peter Buggenhout.

Starting on 03.04.2015, Peter Buggenhout shows two large scale installations from ‘The Blind Leading The Blind’ series at the Bonnefantenmuseum in Maastricht. These works were previously at Gladstone Gallery New York (2014) and at the Taipei Biennale (2014).