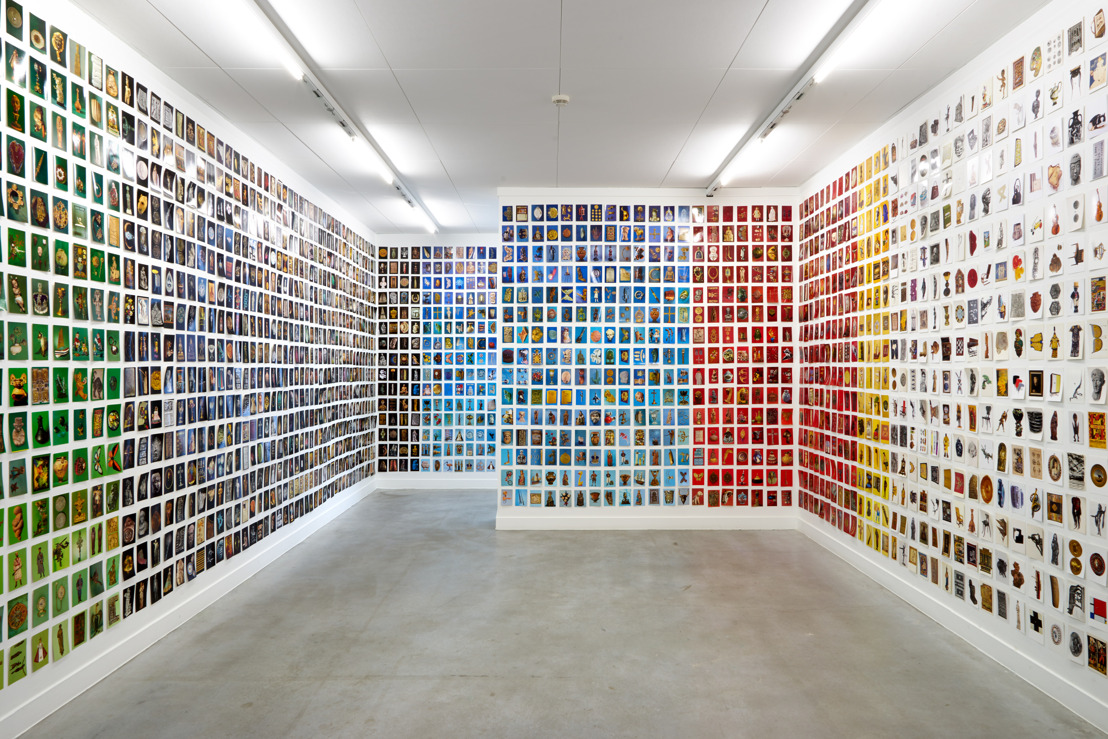 For his installation Without distinction (2016) Oriol Vilanova collected 35 display cases from a variety of Belgian museums and similar institutions. He shows them for what they are and leaves them empty. In this way, he emphasises the furniture itself and questions its neutrality. Can you, as viewer, really see and comprehend the objects it displays? Or do the display cases actually camouflage what they contain, because their own presence, form and history is too emphatically in evidence? Oriol Vilanova’s choreography of objects shifts their meaning. Although each case has its own story, the repetition cancels out their individual character. The artist makes you focus on the act of exhibition itself.

Where Oriol Vilanova began by leaving out the art objects from the display cases, in Anything, everything (2015–ongoing) they are absolutely everywhere. He has placed over 2,800 postcards on the walls of one of the rooms, each of which shows an object against a monochrome background. He spent a long time collecting the cards, visiting second-hand markets week after week for fifteen years. Back in his studio, he orders them into categories, such as the colour used by the museum to present an artefact in a neutral way. Like the display cases in the main room of the exhibition, this installation raises questions about the pseudo-neutrality of the postcards. Does the seemingly neutral background colour camouflage the objects?

Voilà (2016) is a sculpture that stands in the space almost unnoticed. An inattentive visitor could easily walk straight past it. The white wall built in a semicircle is reminiscent of the most invisible architecture within the museum: the room divider. Vilanova’s partition stands so close to the wall of the room, however, that the visitor can’t view the space it encloses. Rather than creating exhibition space, Voilà actually cuts it off. Like all the other works in the show, this installation too conceals more than it shows.

Oriol Vilanova has lived and worked in Brussels for several years. His work has previously been shown at international institutions including Nottingham Contemporary (UK, 2013), the MACBA in Barcelona (Spain, 2012) and the Palais de Tokyo in Paris (France, 2012). He won the Belgian Art’contest prize in 2015. Vilanova’s work is represented by the Spanish gallery Parra & Romero, Madrid/Ibiza.