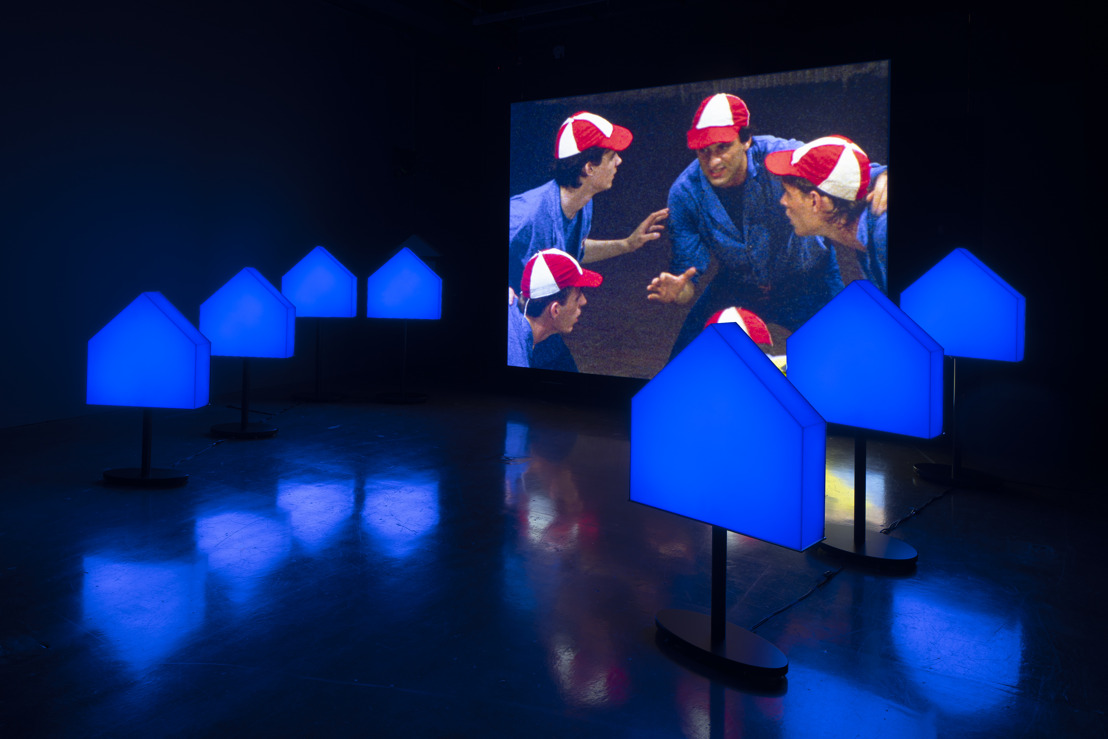 ‘I want to my audience to feel they have power to alter the economic structure in which we are living now.’ This is a comment by Ericka Beckman herself on her new film ‘Reach Capacity’, which will have its world premiere in M this October.

The American artist Ericka Beckman (1951) makes films – not video art, but real films, mostly recorded on celluloid. These films are quite unique experimental works marked by social criticism, and they derive their visual language from popular culture, cartoons, musicals and sports events on television.

If action in films is commonly driven by narrative and emotions, films by Beckman operate differently: she structures her work based on rules of play. The actors in her films normally do not talk, but language still features prominently: rhythmically and repetitively sung verses offer viewers of her films a sense of their content.

Reach Capacity
The origin of 'Reach Capacity’ is The Landlord’s Game, a board game conceived in the early 20th century by Lizzie Magie. The aim of this game was to demonstrate how different economic systems operate, including their effects. First you would play according to capitalist rules. This version we all know, as the Monopoly board game was directly derived from it. As soon as one of the players acquired a monopoly the game would be over, but in in Magie’s version the the board was reversed and you would play on based on new, socialist rules. This would end the monopoly, causing wealth to be distributed fairly.

'Reach Capacity’ borrows this structure, including a frantic first part in which project developers make one towering building after another go up – the towers being symbolized by simple surfaces in neon colours. But in the second part the rules of the game change and thus the action changes. The film turns more poetic and Beckman directly addresses the viewer though sung texts. ’Reach Capacity’ offers food for thought on the value of labour, as well as on what value actually is.

You the Better
Together with 'Reach Capacity’, M will show ‘You the Better’, a film by Beckman from 1983. It is a milestone in her oeuvre: her first film featuring social criticism as central underlying concern. Beckman herself referred to ‘You the Better’ and ‘Reach Capacity’ as bookends, which buttress all the works she made in between these two. The formal similarities between the two films are striking indeed, such as the use of colour, the symbolic buildings and the narrative development, which clearly refers to a game structure.

The two films are accompanied by objects, and this contributes to their meaning. In this way, a two-dimensional projection turns into a three-dimensional experience.

Together with the films, the multimedia installation ‘Nanotech Players’ from 1989 will also be shown.

On Ericka Beckman
Ericka Beckman lives and works in New York and Boston. She studied at the California Institute of the Arts. Her early work can be linked to the so-called Pictures Generation, a group of artists active in New York and Los Angeles in the 1970s and 1980s whose works revealed a renewed interest in recognizable images, often derived from mass media. Recently she showed work in two solo exhibitions: ‘Ericka Beckman: Double Reverse’ in MIT List Visual Arts Center (Cambridge, Massachusetts, 2019) and ‘Ericka Beckman. Game Mechanics’ in Secession (Vienna, 2017). Her work is part of many public and private collections, including the Met (New York), MoMA (New York) and Centre Pompidou (Paris). Beckman is represented by Philip Martin Gallery in Los Angeles.

For previews, guided visits and interviews with the curator, please make an appointment via persm@mleuven.be.

This exhibition is made in partnership with Kestner Gesellschaft (Hannover), with support from Philip Martin Gallery (Los Angeles).