Michiel Coxcie (1499 - 1592) was one of the most influential painters in the sixteenth-century Low Countries. Coxcie was one of Charles V’s favourite painters, and soon became court painter to his son Philip II. In the late 1550s, the latter commissioned Michiel Coxcie to copy the famous Ghent Altarpiece by the brothers Jan and Hubert Van Eyck.

The Spanish monarch subsequently took the polyptych to Madrid. In 1808, the French had it moved to Brussels, where the panels were sold separately. The panels are now scattered across various European museum collections (Berlin, Munich and Brussels). Specially for the exhibition at M – Museum Leuven, all the surviving panels are now being reunited for the first time.

Michiels Coxcie’s copy is particularly exceptional because it is the oldest copy of the complete polyptych. Individual panels had been copied before Coxcie, but his version is the first copy of the complete work. Moreover, this 16th-century masterpiece is a wonderful illustration of the Renaissance artist’s technical and artistic skill.

COXCIE'S COPY OF THE GHENT ALTARPIECE POLYPTYCH: ‘THE MAKING OF’

Philip II was an ardent collector of 15th-century Netherlandish art. Though he attempted to buy beautiful altarpieces from numerous churches in the Low Countries, he was occasionally prevented. Sometimes, however, he was permitted to make copies. Such was the case with the Ghent Altarpiece polyptych, a copy of which was commissioned from Michiel Coxcie. Indeed, Coxcie had previously copied Rogier van der Weyden’s Deposition for Mary of Hungary, and had thus obtained a reputation as a specialist.

This commission is one of the most prestigious and one of the best documented commissions in Coxcie’s career. In 1557, he moved to Ghent temporarily to execute the work. A small wooden room had been built for him in the Vijd Chapel in the Church of Saint Bavo so he could work on the copy undisturbed. In addition to the payments he received for two years to cover his living expenses, he was paid 2000 ducats – an enormous figure – upon his completion of the work. The altarpiece was sent to Madrid, where it was placed in the chapel of the Royal Palace.

In 1808, the French brought the polyptych to Brussels, where the panels were sold separately. It was probably at this time that Coxcie’s copies of Adam and Eve were lost.

In 1820, the panels of the Virgin Mary and John the Baptist were purchased by Maximilian I of Bavaria, and were subsequently given to the Alte Pinakothek in 1836. In 1823, the Adoration of the Lamb and the Deity Enthroned were purchased by Frederick William III of Prussia for the Gemäldegalerie in Berlin. After a period of peregrination, the side wings – though without Adam and Eve – ended up in William of Orange’s collection and were eventually purchased by the Belgian State in 1861. They were then gifted to the Royal Museums of Fine Arts of Belgium in Brussels. Until 1920, they were exhibited in Saint Bavo Cathedral in Ghent, replacing the original side wings.

Characteristically, Coxcie did not want to be considered a slavish copyist: he introduced numerous changes to the original work in order to adapt it to his new age, style and patron. This demonstrates that he was familiar with contemporary theories about artistic imitation. He thus corrected van Eyck’s painting in various places, and made the painting appear Renaissance. For example, on the Knights of Christ panel, he introduced a new group of portraits. In addition to his patron Philip II and his father Charles V, Coxcie also painted himself holding a laurel wreath.

Coxcie was born in about 1499, probably in Mechelen. He was trained at the studio of the Brussels-based painter Bernard van Orley. Afterwards, he spent some ten years in Rome studying classical antiquity and the art of great Renaissance masters like Raphael, Michelangelo and Da Vinci. Upon his return home, he introduced stylistic elements from the Italian Renaissance: a veritable artistic revolution of painting in the Low Countries! He designed altarpieces, stained-glass windows and tapestries for important clients in Brussels, Antwerp and Mechelen. He soon became one of the favourite painters of the Habsburg court.

Coxcie’s contemporaries were inspired by his innovative style and compositions, and even after his death artists (e.g. Rubens) continued to admire his oeuvre. Nowadays, however, the artist has been all but forgotten by the general public. M – Museum Leuven is paying tribute to this talented, versatile artist with the very first retrospective exhibition: Michiel Coxcie. The Flemish Raphael. In addition to important paintings by Coxcie from its own collection, M is displaying many loaned pieces from major international collections (including the Prado in Madrid, the British Museum in London, the Staatliches Museen in Berlin and the Rijksmuseum in Amsterdam). 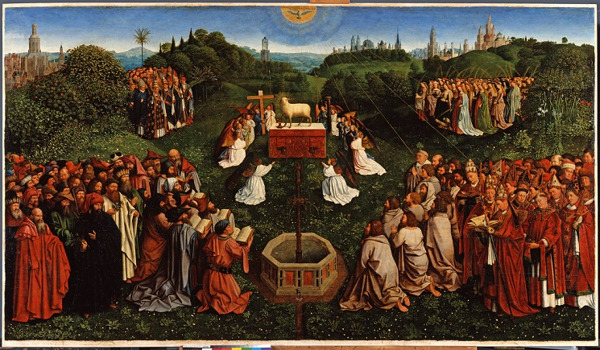