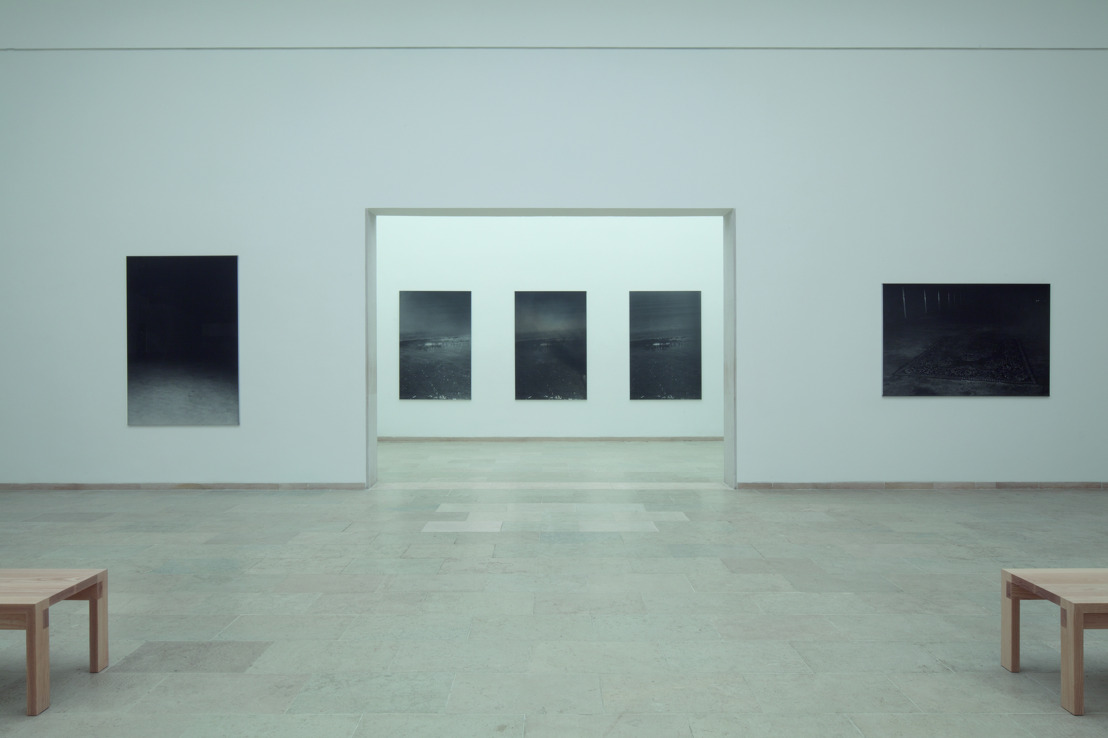 Dirk Braeckman is showing a distilled selection of his work at the recently renovated Belgian Pavilion. The presentation is clean and sober. Eva Wittocx: ‘These are extremely powerful images too: the moment you enter the pavilion, your gaze is pulled towards certain works. Some are hung in pairs or form a series, as they are prints from the same negative. Other works hang on their own and have been given the space to tell their own story, without too much influence from the images displayed around them.’ The photographs are charged with pent-up tension, yet the exhibition conveys a certain tranquillity.’ The presentation does justice to both the intimacy and the distance that the works suggest. ‘When you hang two works alongside each other, dialogue can suddenly turn into anecdote’, Dirk Braeckman says. ‘That’s something I strictly wanted to avoid. I don’t object to dialogue between my works, but it should be emotional rather than anecdotal.’

Eva Wittocx: 'For me, he is one of the most important Belgian artists. He thinks about both the role of art and the place of images today. Braeckman’s work places looking at its heart; it is radical and constantly interrogates itself’

Dirk Braeckman never works with fixed themes or series — his oeuvre forms a continuum. Each exhibition shows a cross-section of his artistic practice at that particular time. Eva Wittocx: ‘Braeckman’s artistic practice nevertheless remains recognizable  throughout the presentation: the rephotographing of existing images, for instance, and the visualization of interiors, undefined spaces, the naked body and landscapes.’

Dirk Braeckman: ‘I use analogue methods, with the darkroom serving as my studio. I need that darkroom process: I find I like to focus more and more on a single image, or rather to continue working on the same one. I don’t want to make one image, then another, then yet another. I prefer to concentrate on a small number of elements and possibilities and to keep working on those. I like to stretch out the time. You can constantly question my images: there are new stories in them every time’
The element of slowing, of seeking silence and peace, is embodied not only in the exhibition and the final works themselves, but also in in the artist’s work process. Braeckman creates his images in the darkroom. Experiment is crucial to both their registration by the camera and their subsequent processing. The exposure, manipulation and development of negative and photographic paper consistently results in new and unique images. Graininess, spots, cropping and flattening of perspective resist an immediate reading or interpretation of his work. Over and underexposure and working in grey tones heighten the iconic character of his images.
In July 2016, Dirk Braeckman and Eva Wittocx, Senior Curator of M–Museum Leuven were confirmed as Belgium’s representatives at Venice by the Flemish Minister of Culture, Media, Youth and Brussels, Sven Gatz. M is providing the institutional organization for the show. The exhibition that Dirk Braeckman and Eva Wittocx have compiled for the Belgian Pavilion consists of over twenty monumental works, some in colour, most in shades of grey. Most works are new, complemented by a selection of earlier pieces.

Sven Gatz (Flemish Minister for Culture, Media, Youth and Brussels): ‘I was delighted last summer when the jury chose Dirk Braeckman, as I am a great admirer of his highly individual work. The way Braeckman works and uses photography is unique and utterly fascinating’

Dirk Braeckman (1958) has spent the past 25 years gradually developing an extensive portfolio. Working with the medium of photography, he occupies a distinctive place within the visual arts. He has taken part in numerous exhibitions, such as solo shows at M—Museum Leuven, Le Bal in Paris, BOZAR in Brussels, De Appel in Amsterdam, S.M.A.K. (Museum of Contemporary Art) in Ghent. Recent gallery shows include Zeno X Gallery in Antwerp, Thomas Fischer Gallery in Berlin and RoseGallery in Santa Monica. Braeckman’s works are part of private and public collections around the world, including in FRAC Nord-Pas de Calais, Sammlung Goetz, FNAC Paris or Musée d’Art Contemporain et Moderne in Strasbourg.
Eva Wittocx (1975) is senior curator at M–Museum Leuven, where she developed the institution’s contemporary art programme focusing on solo exhibitions by both emerging and established artists. She also writes about contemporary art and curates the yearly performance festival Playground. She was a curator at S.M.A.K. (Museum of Contemporary Art) in Ghent from 1997 to 2006, and at STUK Arts Centre between 2006 and 2009.

M–Museum Leuven and König Books in London are publishing a new book to accompany the exhibition — a selection of work from Dirk Braeckman’s practice, with the emphasis on his recent creations. It includes 167 images and three texts in English by Douglas Fogle, Hubertus von Amelunxen and Eva Wittocx.
20,8 x 25,6 cm, 192p, €39,8

After the Venice Biennale, the exhibition will return to Belgium in February 2018 where it will be presented as a double show of Dirk Braeckman’s work held simultaneously at M–Museum in Leuven and BOZAR – Centre for Fine Arts in Brussels. The works will also be shown at the Frans Hals Museum/De Hallen in Haarlem towards the end of 2018.

Two-day symposium in Venice and Leuven