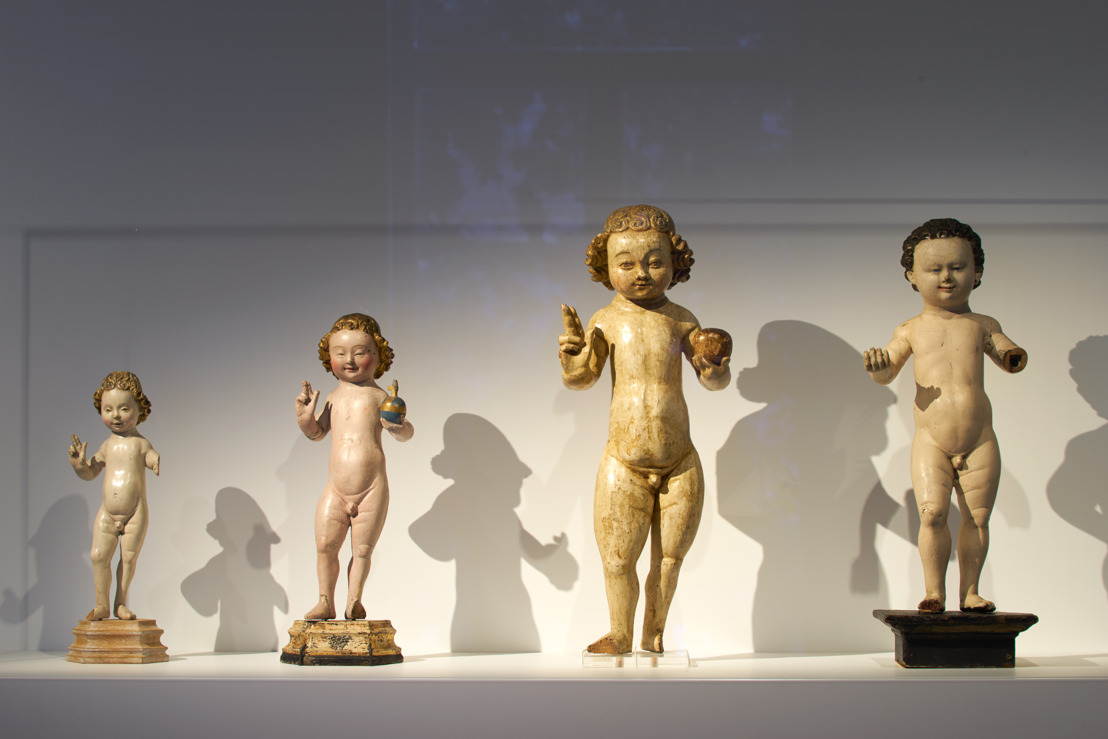 Is the unknown unloved?

Medieval sculpture challenges us with numerous enigmas. Several waves of iconoclasm destroyed an enormous number of sculptures and sources. Moreover, many statues were severed from their original context, such as churches and monasteries. This lack of historical anchoring points presents a great challenge to researchers. There are more questions than known facts. For example, how can we attribute sculptures to a specific region, city, workshop, or artist? This exhibition is therefore pioneering a different research approach in which we take the broader context into account. Statues from different regions have more in common than may appear at a cursory glance. Stylistic and iconographic elements transcend these regional borders and tell a rich and fascinating story.

In the 15th century, many sculptors were active in Leuven. Unlike in Antwerp, Brussels, or Mechelen, however, they were not united in a guild. Consequently, statues from Leuven do not bear hallmarks, which makes them more difficult to identify. So how do we know that these statues were made in Leuven? To answer this question, research examine their stylistic characteristics.

Let us take, for example, the Statue of Christ (Ecce Homo, ca 1500, Brabant). The life-sized figure of Christ is a so-called Andachtsbild. The statue occupied an elevated position in a church, and the congregation would look up at it during their prayers. It was originally painted, so that Christ appeared to be a human of flesh and blood. The stocky body, the raised ribcage, the thick cloak of stiff material, and the button are all typical of the Leuven style. The head crowned with thorns shows certain similarities to the Man of Sorrows by Albrecht Bouts (1451/55-1549). But there are also other discernible influences, so Leuven is not the only place to which the statue might be attributed. For example, the hair, which curls downward into a point, is different from the rougher Leuven style which consistently employs a C-pattern. This means that we cannot attribute this statue to Leuven with certainty, since there are clearly other influences.

Hendrik Roesen is one of the few Leuven sculptors who is known by name. He sculpted several extant statues, including Saint Cornelius or the Blessed Bishop in this exhibition. We see clear characteristics of Roesen’s hand in the statue’s posture and the lines along the blessed bishop’s nose. Nevertheless, recent research has cast doubt on this attribution. There are clear influences of the Liège style in the decoration and the interplay of lines in the draped vestments. Furthermore, there is an unknown rose hallmark on the back of the statue. Further research into this hallmark is of crucial importance. M is a pilot partner in an international research project based at the RKD (Netherlands Institute for Art History), which is compiling a database of hallmarks. This international point of reference will be an important instrument for future research and the further identification of statues.

In the late 15th century, Mechelen became more politically important as the administrative capital of the Habsburg Netherlands. The carved coat of arms depicted three pillars guaranteed the quality of the statues made in Mechelen. The word ‘Mechelen’ or the letter ’M‘ were used as hallmarks for the painting on the statues. A number of artist’s or workshop marks were also used, such as the five-pointed star on the statue of the Virgin and Child. The statue also led the researchers to a surprise. Hitherto, it has always been assumed that statues from Mechelen were all carved from walnut or oak, but this statue demonstrates that Mechelen sculptors also used poplar wood, a soft, local wood, on a large scale. This is an important insight for the future identification of pieces from Mechelen.

This exhibition features a variety of wooden Mechelen Dolls or ‘poupées de Malines’. These small and colourful statues of saints were the mass-produced objects of their age. They were intended for private devotions, but were also used in small altars in the home or enclosed gardens. You can easily recognise the dolls by their characteristic design: a simply round face, heavy eyelids, narrow eyes, and thick, near curls. Altarpieces and small alabaster reliefs were also popular mass-produced items in Mechelen. These were decorated with gold leaf and were used as private altars. For example, the Altarpiece with the Adoration of the Magi (1500-1510) is one of the twelve extant Mechelen altarpieces. The traces of hinges on the sculpted work reveal that it originally had wings and that this very detailed little scene was the central part of the altarpiece.

Brussels and Antwerp were by far the most important centres for the production of sculpture. As the capital of the Burgundian empire, Brussels was a leading artistic centre from 1430. Thanks to their hallmarks, the exhibited works can be attributed to artists who were active in Brussels. We see the Brussels hammer, and the carpentry for altarpieces was marked with a compass and plane. The painting was marked with the word ‘BRUESEL’. Nevertheless, these are not our only means of identifying these works. Thanks to stylistic comparisons and a statue in the OCMW Museum in Brussels, our researchers were able to attribute two statues, the Mourning Mary and John, to Passchier Borman. He was a member of one of the greatest dynasties of sculptors of the age: the Borman family. His father Jan Bornam was known both nationally and internationally as the ‘best sculptor’. He passed down his skill and often collaborated with his sons Jan and Passchier.

Starting in 1525, Antwerp became the most important producer and exporter of sculpture and altarpieces. This exhibition features an extensive selection of Antwerp altarpieces in a variety of styles. One example is the Circumcision of Christ, a commonly depicted scene. We know that this fragment was produced in Antwerp because it is marked with a small hand. The mediocre carving of this group of figures leads us to suspect that it was a mass-produced piece. The high demand for altarpieces from Antwerp led to fast and cheap production. From the mid-15th century, the first sales buildings opened, which were the showrooms of their day. Sculptors would sell ready-made and semi-complete altarpieces. That is why we now find Antwerp altarpieces from Scandinavia to the Canary Islands.

Focus on the Maasland and Northern Low Countries

Brabant by no means had a monopoly on sculpture. Beautiful works were being produced in the Maasland from the 11th century. Unfortunately, waves of iconoclasm destroyed many of the sculptures that had been produced in the Northern and Eastern Low Countries. Consequently, it is difficult for researchers to assess the production of sculpture in these regions. This exhibition has the good fortune of being able to present a number of the oldest, 11th-century works, such as the Sedes Sapientiae and the Christ Crucified in brass. This small figure of Christ was probably produced in the circle of Reinier van Huy.

Furthermore, research in the extant works, such as the statue of Saint Dorothy, has not only revealed the production of high-quality works in Utrecht, but also stylistic, iconographic and compositional cross-fertilization between regions. Curator Marjan Debaene: “This statue is attributed to the anonymous Master of the Utrecht Stone Head of a Woman. The prominent eyes, the broad nose, and the oval head are considered characteristic of the master. Recent research has broadened our perspective. The face, position of the body, and draping of the cloth are depicted in the Mechelen style. This leads us to suspect that the sculptor was trained in Mechelen but then moved to Utrecht. This artistic cross-fertilization between regions is a much richer research method than simply attributing works to a particular region. To us, this sculpture epitomizes the concept of ‘cultural space’. We use this concept to research all the facets of medieval sculpture. We are pioneering a nuanced research approach that moves beyond the conventional ‘cult of artists’.”

Another exceptional work is the Peter Altarpiece from the Duchy of Guelders. The richly decorated wooden altarpiece was once covered with an abundance of colour and gold and depicts the legend of Saint Peter in three scenes. Michael Rief, Vice-Director and Head of Collections at the Museum of Aachen: “The Altarpiece was originally produced for the Church of Saint Peter ad Vincula in the Dutch town of Venray and was probably made around 1500-1510 in the Duchy of Guelders. This altarpiece is utterly exceptional. It is the only great example from the Northern Low Countries that survived the Protestant iconoclastic destruction."

Following this research, M aims to take another important step to strengthen its role as an international centre of expertise for medieval sculpture. Peter Carpreau, Conservator and Head of Old Masters, M-Museum Leuven, explains: “M aims to be an international catalyst for research into medieval sculpture. This research is difficult, however, due to the lack of written sources. Much work needs to be done to catch up with research into medieval painting. Inspired by the series ‘Early Netherlandish Paintings’, we are working on the very first reference work that brings together sculpture from the Low Countries. We will collaborate with international specialists. We will thus give sculpture from the Low Countries the prominent place it deserves.”

Crossing Borders. Medieval Sculpture from the Low Countries, until 27.05.2018 at M-Museum Leuven.

An initiative of and research conducted by ARDS, Expertise Centre for Medieval Sculpture, in collaboration with the Suermondt-Ludwig-Museum in Aachen. The exhibition will be accompanied by a catalogue in German. This publication was generously supported by the Peter und Irene Ludwig Stiftung.