From the 15th century onwards, Leuven was one of the principal centres of glass production in the Low Countries. Jan de Caumont (1577–1659), meanwhile, was a key artist in Leuven’s history. Experts view him as one of the top painters on glass of the first half of the 17th century – the final flowering of stained-glass art in the region. He was the city’s official glass painter, executing commissions from his workshop in Leuven for the whole of what was then the Duchy of Brabant.

M has an extensive collection of stained glass, with pieces dating from the 15th to the 19th century. The newly acquired work by de Caumont fills a gap in that survey. Denise Vandevoort, Alderman for Culture in Leuven: ‘Leuven wants to place more emphasis on the work of Jan de Caumont, because of its exceptional quality and the fact that he came from Leuven. The City and the OCMW [Public Centre for Social Welfare] currently owns a series of 27 glass medallions by him. A window of this calibre was previously lacking, so this is a valuable addition to the collection. The City has invested a total of around 25,000 euros. Peter Carpreau, Director of the Old Masters Department at M Museum Leuven: ‘The stained-glass window is a rare example of the artist’s early work and dates from 1618. Its quality is exceptional. What’s more, there are only a few donor windows like this in Flanders. They are often smaller than this, or incorporated in a historical building. The donor figures are Margaretha Vekemans and her daughter. We know this from a 1956 exhibition catalogue, in which the window has an inscription that has since, unfortunately, been lost.’ The window’s companion piece, showing the donor's husband, was installed in St Gwenllwyfo’s Church, Llanwenllwyfo (Anglesey, UK).

A 17th-century ‘logo’ for the Vekemans family

The panel shows an image of Margaretha Vekemans and her daughter. Both are kneeling and accompanied by two patron saints, Agnes and Elizabeth of Hungary. Vekemans was the wife of Alexander van den Broeck, administrator of the Antwerp municipal treasury. They were important sponsors in the 17th century of the ceremonial entry into Antwerp of Cardinal Infante Ferdinand of Spain (1609–1641) and also of the Carthusian monastery in Lier. Commissioning a stained-glass window was a way of displaying your logo avant la lettre. Prominent individuals or institutions used to present them to a church or abbey. The same applies to this window, which the Vekemans family donated to a monastery. There are strong indications, therefore, that it came from the Carthusians in Lier. 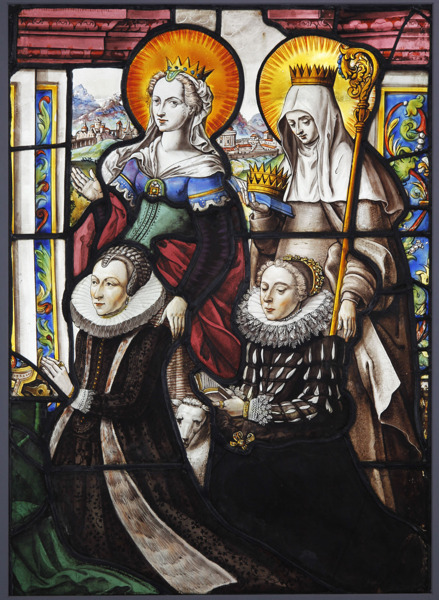