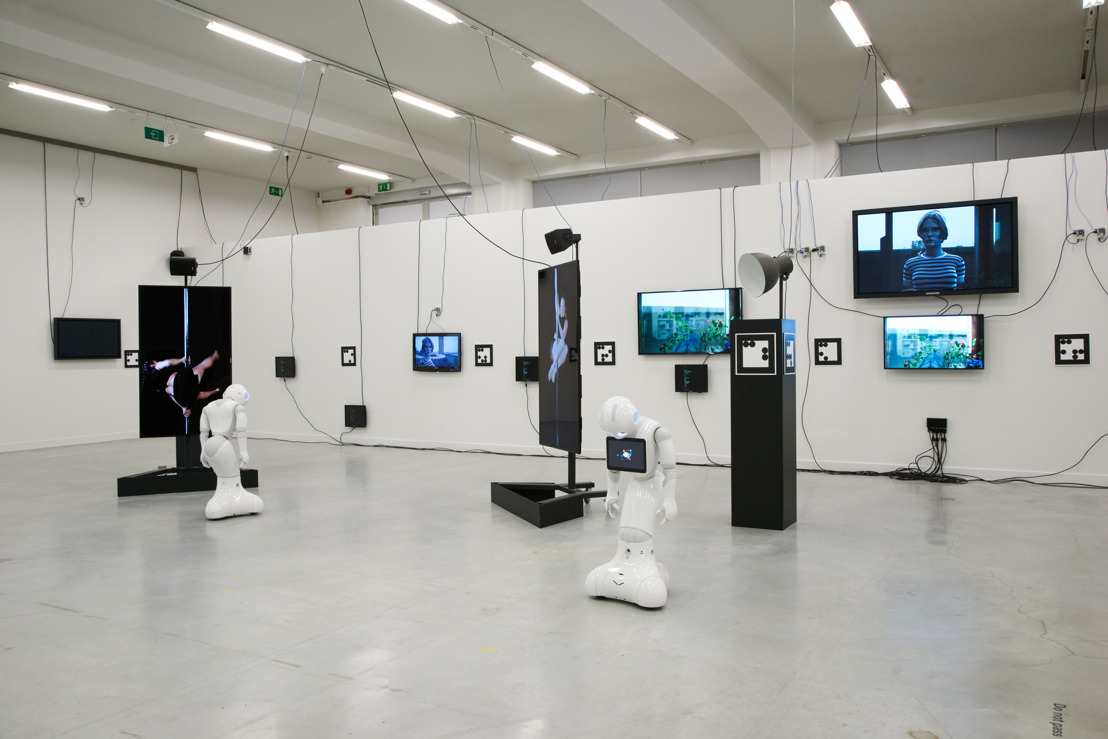 In her installations, videos, online platforms and performances, Cécile B. Evans explores the impact of technology on our behaviour. She is inspired by the increasing number of mediatized events, such as Wikileaks or terror attacks. In Sprung a Leak, she reflects on data leaks and the unreliability of systems.

“Sprung A Leak was triggered by a recent period of time, in which the everyday felt suddenly intertwined with an increasing number of highly mediatized, highly charged events. There were attacks, coups, political scandals, epidemics. There were regular leaks of information that would reveal endless layers. Alarmingly, most people didn’t seem to know what they could do other than consume and produce more content- locked in an emotional contagion of sorts- a loop. What most of these events had in common is that they were accessed using hardware: my phone, my computer, through the bias of software: my social media, my apps, search engines. This access, these leaks, the abundance of information itself can (and has proven itself to) to be productive and powerful. But how is a situation such as this sustainable if the people who would most benefit from it have no control over it?”

At the same time, the title is a reference to Two Noble Kinsmen, a comedy by William Shakespeare that was published in 1634. When a gaoler’s daughter can no longer control her emotions, she uses the metaphor: 'A leak is sprung, a sound one'. In Shakespeare’s play, the leak in the ship about which the character speaks actually refers to the failure of technology when faced with the natural elements. Sprung a Leak focuses on precisely this tension between the breakdown of technology and human emotion.

Sprung a Leak is a play in three acts in which two humanoid robots, a robot dog and a fountain play the lead roles. Three ‘users’ are also part of the performance. The machines are programmed to exhibit typically human or animal behaviour, which only enhances the empathy of the viewer. At the same time, the identical, generic voices of the characters prevent the audience from identifying with the protagonists. This voice suggests that all the characters, however diverse they may initially appear in terms of their hardware and programming, are actually part of a single software system that is completely controlled.

Both in terms of its plot development and form, Sprung a Leak is an imperfect collaboration between humans and machines. Via screens, the users and the three robots receive information that makes them increasingly vulnerable. Through the digitally animated character of the beauty blogger Liberty, Sprung a Leak takes a different turn: conventions such as time and even the structure of the play collapse. This is a story in which humans and machines have to work together to stop everything and start again. This presupposes a social revolution, or at least this is suggested in reference to Eugène Delacroix’ painting La Liberté guidant le peuple (1830) at various TV screens at the end of the third act. Collaborating to start afresh is literally what humans and machines do in Sprung a Leak.

Cécile B. Evans (1983) is an American-Belgian artist living and working in London. Future solo exhibitions include Art Basel Statements (w. Galerie Emanuel Layr) and the Castello di Rivoli, Turin (IT) (Illy Prize). Recent selected solo exhibitions include Galerie Emanuel Layr, Vienna (AT), Tate Liverpool (UK), Kunsthalle Aarhus (DK), the Kunsthalle Winterthur (CH) and De Hallen Haarlem (NL). Her work will be included in the Fundació Joan Miró, Barcelona (ES), the 4th Ural Industrial Biennal (RU) and the Louisiana Museum of Modern Art, Copenhagen (DK). It was included among others in the 9th Berlin Biennale (DE), the 20th Sydney Biennale (AUS) and the Moscow Biennal of Young Art (RU). Public collections include The Museum of Modern Art, New
York (US), The Rubell Family Collection, Miami (US), the Whitney Museum of American Art (US), De Hallen (NL), the Castello di Rivoli, Turin (IT), the Louisiana Museum of Modern Art, Copenhagen (DK) and the FRAC Auvergne (FR).

Sprung a Leak was coproduced with the Tate Liverpool and Haus der Kunst Munich.

12.10.2017 – Artist’s talk: Cécile B. Evans in conversation with Craftworkz robot programmer Deevid De Meyer on the subject of robotics and artificial intelligence in Sprung a Leak.
16–19.11.2017 – Cécile B. Evans will also present a new performance during the annual Playground festival, co-produced
by M and STUK Leuven.