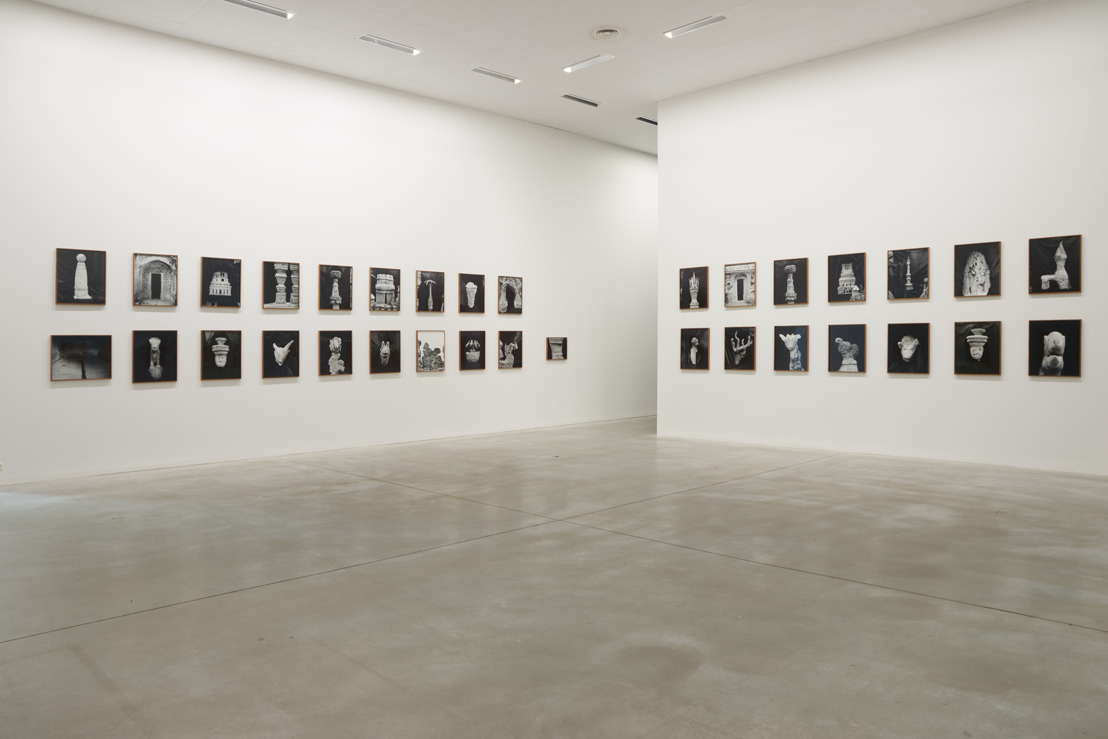 From the toys of the educational pioneer Friedrich Fröbel, a 14th-century tapestry of the Apocalypse from Angers, a Bollywood school in Dakar, the ideal palace of the postman Ferdinand Cheval, and the utopian architecture of Paolo Soleri to the Sardinian musician Franco Melis. It seems as though Aurélien Froment navigates from one subject to the next. Nevertheless, they all have something in common. In this exhibition, Froment showcases their realizations and incorporates them in his art. Just like a musician changes their register, he transforms the works to which he refers, giving them new life that is detached from the original work.

Replicas of the blocks made by the German educational scientist Friedrich Fröbel form the heart of the presentation. You will see cubes, circles or cylinders in various forms spread around the space. A series of photos multiplies these forms in the space. Froment thus not only externalizes the philosophy of the pedagogical pioneer, he gives everyday objects like ‘toys’ a new status by placing them in a museum, and thus enables Fröbel’s thought to live on. Furthermore, he has selected works in the M Collection that refer to these basic shapes. They are presented together in this installation.

Polyphony is a concept that recurs throughout several works by Aurélien Froment. For example, five wind instruments from the Music Instruments Museum evoke the body of a musician. He juxtaposes these with videos (Non Alignés, 2016 & Le Chant du Monde, 2017) about the cross-fertilization of dance and music between India and Senegal. You hear the Indian repertoire of singer Amadou Badiane and you see the Senegalese dance in the Bollywood tradition. Froment films these symbiosis of bodies and music against the background of symbols from colonial and postcolonial history.

In his most recent film Allegro largo triste (2017), Froment films Franco Melis (°1958, Tuili), a Sardinian musician and launeddas player. There are no written scores of this music, so musicians train with masters who teach them how to play the instrument and the repertoire itself. In this video, Froment documents how the music is transmitted from master to student without a written score.

The French postman Ferdinand Cheval (1836-1924) collected stones throughout his life. These strange forms inspired him and led him to build his ‘ideal palace’. With his rich imagination, he thus constructs all kinds of characters, animals, exotic plants and decorations. Aurélien Froment brings the construction back to Cheval’s original intention: a mausoleum for him and his wife. In his photo series, Froment deconstructs this collection of images. He shrouds the photographed patterns in black dust and thus makes isolated fragments for an ideal inventory.

For his latest video Apocalypse, Froment was inspired by the largest tapestry in the world: the Apocalyps of Angers. It represents the story of the Revelation to John on Patmos and depicts the power of God’s word. In his film, Froment presents the text of Revelation through the filter of Jean-Pierre Brisset’s (1837-1919) poetry. Just like Brisset went in search of the origins of the French language, Froment researches the grammar of primal sounds and applies them. His films thus blends texts and tableaux from the apocalypse, resulting in a flood of meanings and symbols.

In 1970, architect Paolo Soleri (1919-2013) started building a utopian construction in Arcosanti, Arizona (USA). He aimed to offer an alternative to the typically horizontal development of a city and allows architecture and ecology to coalesce. He based his building technique on the casting technique of an artisanal bell foundry. In Arizona, he experimented with all the possible variations of this technique and used the earth that he found there as a building material. In the series Earthworks (2015), Aurélien Froment travelled to Arcosanti. At M, you will see the bells, the constructions and the models that were made through the process of casting.

Aurélien Froment is a French artist. He completed his studies at the École des Beaux-Arts de Nantes in 2000 and qualified as a film projectionist in the same year. His works have appeared at the Venice Biennale (2013), the Sydney Biennale (2014) and the Dakar Biennale (2016). After spending eight years in Dublin, he recently moved to Edinburgh.

His recent individual exhibitions include CAG in Vancouver, FRAC Île-de-France / Le Plateau in Paris, Les Abattoirs in Toulouse and the NCAD Gallery in Dublin. He took part in the Playground festival in Louvain in 2008 and 2009. His work has also been shown at the Villa Empain (2014) and the Gallery Meessen-Declerq (2016) in Brussels.

Aurélien Froment has expressed the wish that all the works of Chilean film-maker Raoul Ruiz (Chile 1942 – Paris 2011) should be shown in the places where he is invited to exhibit. As this œuvre counts more than 130 films, this is an ambitious undertaking. The showing is taking place in chronological order and follows events in Salzburg and Toulouse. M-Museum Leuven will present Slow retrospective 05 and Slow retrospective 06.