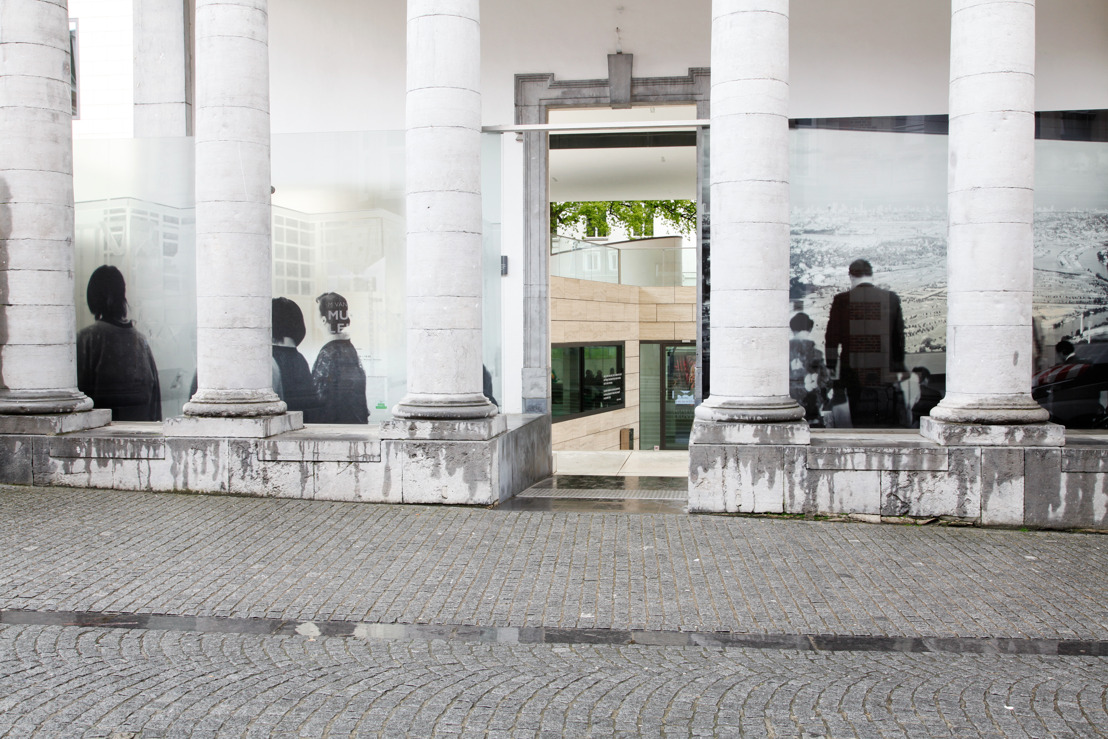 Treasury of images: rereading the archive

How is architecture visualised? And in what way is it exhibited? These are the questions that occupy Konrad, whose love of architecture is expressed in her work as a consequence. A typical aspect of Konrad’s practise is the research that precedes that work. The result is an inexhaustible archive of images, in which the development of cities like Tokyo, Chicago or Shanghai is central. This ‘image pool’ as Aglaia calls it, is the foundation of all her work and hence also of this exhibition. ‘To me, this exhibition has been a rereading of my archive.’ Konrad reflects on a variety of themes in this way, including the ideology of modernism and how it took physical shape in concrete.

It is clear from a glance at the various parts of the exhibition that Konrad’s work cannot be pigeon-holed as ‘architectural photography’. You won’t find conventional city views, traditional icons or typical landmarks here. Curator Eva Wittocx: ‘Aglaia has the ability to visualise buildings or architecture as autonomous sculptures, in which form and materiality are central. It’s the first time, moreover, that an architect rather than an artist has translated the artworks for the interior of M. Aglaia has been working this way with Kris Kimpe for years. This collaboration and architectural translation are very important to her.’ Consequently, the way she presents her works is also atypical. She displays the objects in the first room, for instance, as a collection of stones, a lapidarium. The diverse collection is like an index: these are the building blocks of the exhibition. Other rooms have Rückbaukristalle spread around – lumps of demolition debris that are here given a second life.

She is showing several existing series of photographs at M. The aerial photographs in Boeing Over look like X-ray photographs of the earth, while Undecided Frames focuses on the question of what makes one photograph better than another. In Carrara the artist shows in turn how the marble quarries function as a marvellous summary of sculptural architecture. She has also selected a number of new series from her immense image archive. The photographs in Demolition City were taken during the artist’s time in Rotterdam. She uses them to explore every aspect of demolition: the act itself, the form demolition takes and the political dimension underlying it. Shaping Stones shows the first time Aglaia utilised a monumental grid: ‘The visual content comprises 25 photographs, in which one image influences the next. I also wanted these photos to be as high and large as possible. This serves to inscribe the monumental block with 25 images in the architecture of the museum building.’ The series zweimal belichtet includes chance double exposures – an unconscious mistake she makes as a photographer and over which she has no control, but which results in unexpected photographs.

Aglaia Konrad uses her 16 mm films to explore the boundaries between sculpture and architecture, just as she does in her photographic series. Film to her is a way of experiencing a building: ‘I want the viewer to concentrate totally on the architecture. That’s why my films are mostly silent and have no actors.’ The camera focuses on the textures, the details, the subtle lighting effects and the shadows. The same goes for her new film, La Scala. Konrad sought out the villa La Scala by the Italian architect Vittoriano Vigano on Lake Garda in Italy. The building is a brutalist house with Japanese touches, in which ‘interior’ and ‘exterior’ seem to overlap. It is like a camera that constantly scans and captures its surroundings – a feeling heightened here by the split-screen projection. The distinctive flashes of light that occur when filming on 16 mm have also been retained; they give the film a rhythmic, disjointed character.

New work for the entrance to the museum

Konrad has made a new work for the entrance to the museum.  She will also present an installation in the closed space of the Frauenzimmer comprising glass from the Astro Tower in Brussels. The material refers to the irony of the glass architecture that was popular in the 1980s. Installed in this wooden room, the glass encourages reflection and the projection of the viewer’s own thoughts. On show in the last gallery is the exhibition experiment TOKONOMA on which Aglaia Konrad worked with artists Suchan Kinoshita, Olivier Foulon, Jörg Franzbecker, Kris Kimpe, Willem Oorebeek, Eran Schaerf and Walter Swennen.

The exhibition is accompanied by a new publication, From A to K (Buchhandlung Walther König). The book contains a large selection of previously unpublished material in both colour and black and white. Essays and personal accounts explore the many public and private dimensions of architecture and urbanism in Aglaia Konrad’s work.

The exhibition 'From A to K’ is part of a series of large-scale monographic exhibitions at M of the work of artists like Jan Vercruysse, Philippe Van Snick, Dirk Braeckman, Geert Goiris, Patrick Van Caeckenbergh and Peter Buggenhout.